What happens if I archive a Campaign before all messages were sent? Print

If you attempt to archive a Campaign before it completes delivering messages to all of the contacts, you receive a helpful warning message letting you know that not all contacts have been sent. 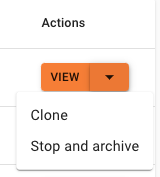 If a Campaign is archived before it finishes delivering its queue of messages, undelivered messages in the queue may or may not be delivered. Additional detail will display in the Analytics dashboard.